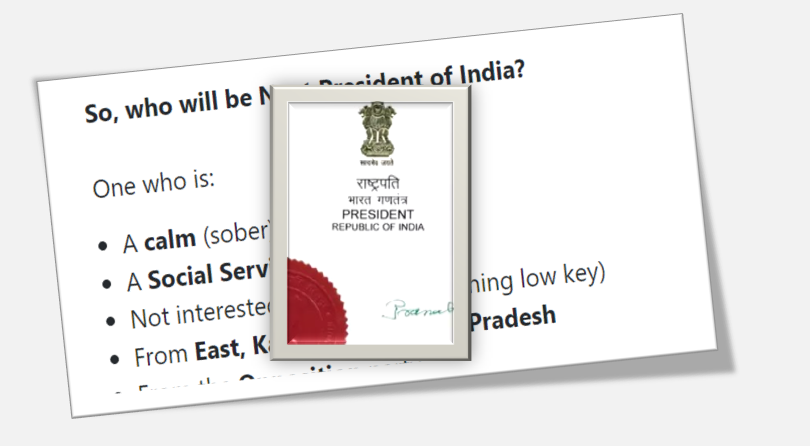 I like to predict without the help of astrology. I could of course, learn astrology and connect simple logic and common sense to planetary motion, and become famous. But, I am too honest to do that! 😉

To make a proper prediction we will have to understand how Modiji & Amit Bhai go about making decisions.

So, I will first lay down the criteria which the PM and HM probably will go by to choose the Next President of India.

And, symbolically an RSS man will be a good handle for cantankerous opposition leaders to rake up issues.

Modiji is known to send a message with every speech and every decision and every move of his. This is a good opportunity for him to be gracious and puncture the opposition claim of him being a BJP centric or Sangh centric man.

A candidate from the opposition parties will put him on a higher pedestal as compared to all Prime Ministers since Independence. This is a low risk, high impact opportunity to gain that space, which may not come again in the remaining period of his term.

By selecting a Candidate from the opposition parties Modiji and BJP will send a message that it is unifying the Country and is not divisive.

Compared to the previous instance of choosing a Presidential candidate, this time around, BJP is better placed. So, they can think out of the Box and surprise the country with a good choice. President Kovind, was a low impact, No risk choice, this time, a low risk, high impact choice is affordable.

A candidate from the East, or from Andhra Pradesh or Tamil Nadu will be politically beneficial.

A candidate from Andhra Pradesh is a good option as people of AP have been told by Chandrababu Naidu and Jagan that BJP Govt. has done injustice to them. A choice from AP will go a long way in reversing this opinion.

Less Political and Savvy than Modiji

A very active President will put the Prime Minister in a difficult position in the public eye, as he will have competition in the media space and public opinion.

Ceremonial Posts have to be Shared

I believe that Modiji goes by principle that all Cermonial Posts (perks), have to be shared amongst as many Indian Citizens as possible. And, these posts are a one time privilege and everyone has to get a look in.

So, anyone from the present or past cermonial posts are a no choice.

So, who will be Next President of India?

However, this post has no spice unless we talk about the possible candidates being suggested.

But, Modiji and Amit Shah will most probably surprise us all.

However, I am sure that the Final Choice will satisfy most of the above Criteria!!